Because of the dark mask over their eyes, and possibly because we usually find them going through our trash cans, raccoons are often called little bandits, and they are closely related to the bear family. The word “raccoon” comes from the Algonquin Indians and means, he scratches with his hands. Raccoons weight averages are around 20 pounds, and their average body sizes are around 38 inches long, but they can get much bigger. In fact, the largest raccoon on record weighed in at 62 pounds!

The raccoon diet varies from season to season but typically they will eat anything from insects, fruits and nuts to small reptiles, amphibians, birds and other vertebrates. One of the reasons we usually find raccoons going through our trash after dark is because they are nocturnal and sleep during the day. Raccoons are very intelligent, and like humans, have paws with 5 digits. These paws are capable of grasping and prying, just like ours!

According to experts, raccoons score extremely high on the mammal IQ test. They are found to be more intelligent than cats, but like cats, Raccoons don’t follow direction well. Raccoons have extremely poor eyesight, however, they do have above average hearing and excellent climbing skills. Like cats they can fall from distances as great as 40 feet without sustaining serious injury. They are also great swimmers and can easily cross rivers, lakes and streams with ease.

Raccoons have a very short lifespan and typically only live two or three years. They do, however, live much longer in captivity and the record for a captive Raccoon is twenty one years. Many are hit by cars, are eaten by other predators or die from disease, which could be a result of all of their dumpster diving.

Although some people like to keep raccoons as pets, experts advise against it as they can be aggressive and dangerous to humans. In some states, pet raccoons are illegal. At a young age raccoons can be playful and interact well with humans, but as they get older, they become more aggressive, especially during mating season, and attacks become more likely to occur upon provocation.

Raccoons love city living. There could be up to 8000 raccoons lurking about in a big city. Raccoons are able to open many types of doors so if you have a raccoon in your neighborhood keep your doors locked unless you want them going through your pantry. Be careful putting them in a cage because they are excellent escape artists and can use their lightning quick speed to catch fish right out of the water. If you have a vegetable garden at home beware the raccoon. They will eat most everything in your garden, even knocking over cornstalks to get the corn.

Raccoons can cause a lot of problems and be a real annoyance. They do damage to roofs, attics, shingles, and fascia boards as well as fruit trees, gardens, trash containers and lawns. In rural areas they eat crops and raid poultry houses. Because raccoons eat many wild birds and animals, many of which carry a variety of diseases, Raccoons can carry a number of diseases and parasites. Raccoons are known carriers of Rabies, Canine Distemper, Mange, Tuberculosis, Roundworm and many others. They are commonly infested with Fleas, Ticks, Mites and Lice which are known to carry a number of diseases.

If you have raccoons in the area make sure your trash can lids are secure. Don’t leave pet food or water outside in the evening, and Make sure your vents are closed and secured. Put a screen over your chimney and if you have a pet door make sure it is locked at night or you may wind up with unexpected company in the morning. If the problems persist, rather than trying to trap or kill the raccoon yourself, it is best to call an expert who has experience dealing with them. 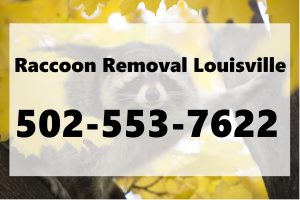 Call 502-553-76622 for Louisville raccoon control you can trust. We are DNR licensed and insured raccoon removal and control experts with over 20 years of experience in the industry. We have all the latest technologies and equipment to carry out safe and humane raccoon control and cleanup services in a convenient time frame. Call 502-553-7622 to speak with a raccoon control contractor today!